Film Screening and Panel Discussion: “The Last Days of Knight”

ND alumnus and ESPN Films’ “30 for 30” producer Jerry Barca will join professors Annie Coleman and Richard Sheehan for an exclusive screening and panel discussion of “The Last Days of Knight,” a documentary that chronicles accusations, denials and discoveries; riots and death threats; a smoking gun video; and the fall of a coaching legend. This event is sponsored by the Gallivan Program in Journalism, Ethics and Democracy and the Department of American Studies.
Wednesday, Jan. 23; 7 p.m. in Room 129, DeBartolo Hall 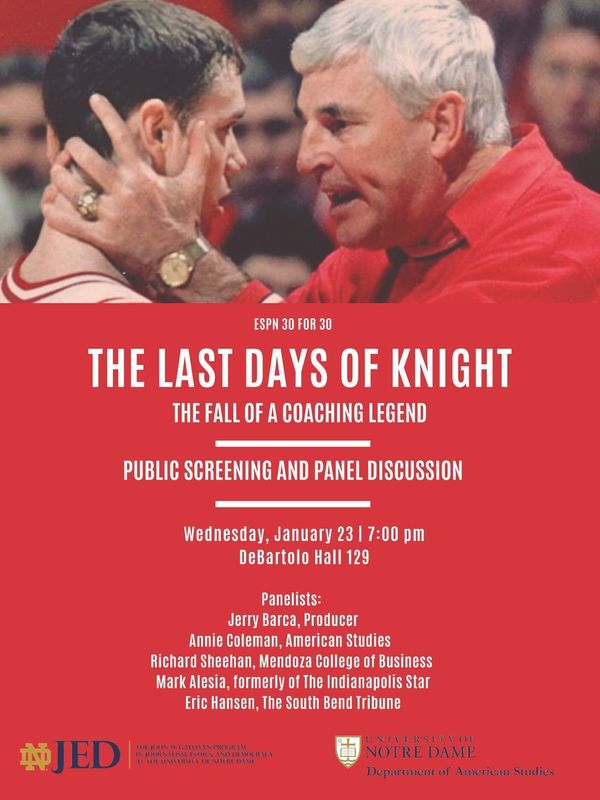 Congratulations to the Gallivan Class of 2018 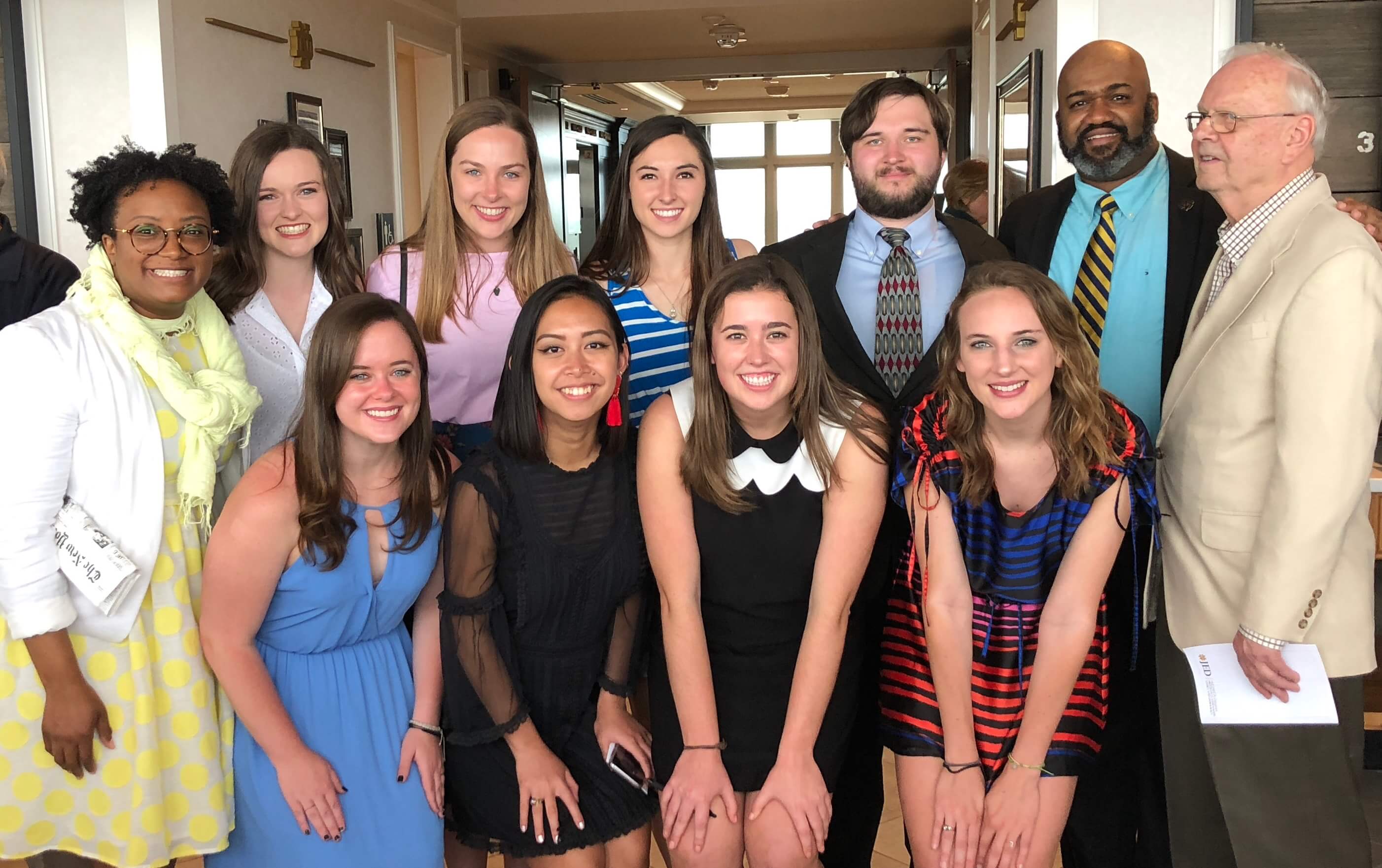 Members of the Class of 2018 and Gallivan faculty.

Learn more about the Class Of 2018 here, and congratulations to the winners of our Senior Awards for excellence in journalism:

The R. V.  Ley Journalism Award for Achievement and Promise

Congratulations to Our Winners in the 2017 Senior Awards in Journalism

The James E. and Barbara Murphy Award for Exceptional Journalism

The R. V.  Ley Journalism Award for Achievement and Promise

Congratulations to Cassidy McDonald, JED class of 2017, on being awarded the Luce Scholarship!

Sarah Childress, JED class of 2003, is featured in this article detailing her career in international journalism.

Follow the latest stories from Cassidy McDonald on her assignments with Nick Kristof of The New York Times.

The Hanna Storm Journalism Internship has been awarded to JED minor Emily McConville.

JED minor Bridget Gallassini has been named a Fulbright scholar!

Congratulations to Our Winners in the 2016 Senior Awards in Journalism!

The James E. and Barbara Murphy Award for Exceptional Journalism

For the second time in three years, a University of Notre Dame student will be going on assignment with Pulitzer Prize-winning journalist Nick Kristof, The New York Times announced Saturday (Feb. 6). Junior Cassidy McDonald of Madison, Wisconsin, is this year’s winner of Kristof’s annual “Win A Trip with Nick” contest.

Director Bob Schmuhl Discusses the Media and the 2016 Presidential Election

Join Bob Schmuhl for an analysis of media coverage and how it has shaped the 2016 U.S. presidential race. Schmuhl is the Walter H. Annenberg-Edmund P. Joyce Chair in American Studies and Journalism and Director of the John W. Gallivan Program in Journalism, Ethics & Democracy at Notre Dame. 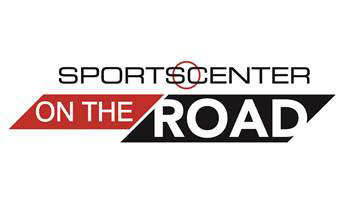 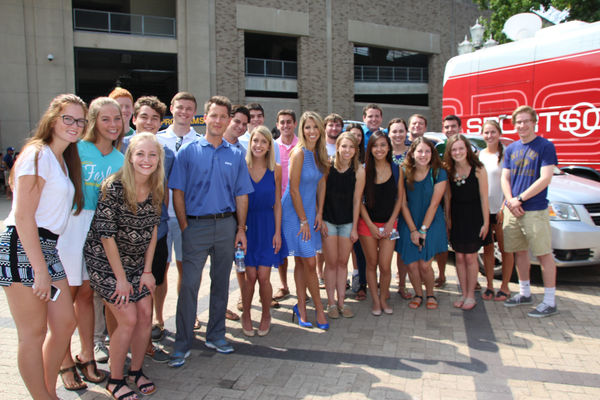 ESPN’s “SportsCenter on the Road” visited Notre Dame for the Texas vs. Notre Dame game in September. Anchors Matt Barrie and Sara Walsh, along with producers Jim Bowdon and Jack Obringer (a Notre Dame alumnus), met and talked with Gallivan Program students on the Friday afternoon before the game.

Robert Costa Catches Up With the Notre Dame Alumni Association

Robert Costa, a member of the Gallivan Program's Advisory Committee and a 2008 alumnus, joined The Washington Post as a national political correspondent in January of 2014.  Later that year he received the "Publisher's Award" for the best political story of 2014.  He recently talked about his career and political journalism in this video of the Notre Dame Alumni Association.

For the third time in the past four years, a student enrolled in the John W. Gallivan Program in Journalism, Ethics & Democracy at the University of Notre Dame is the recipient of the Brook Baker Collegiate Journalist of the Year Award.

Andrew Owens, a graduating senior in the Gallivan Program, was named the 2013 Baker Award winner at a recent ceremony of the Indiana Collegiate Press Association on the campus of Indiana University in Bloomington.

Owens joins Sarah Mervosh, a 2012 Notre Dame graduate, and 2010 alumna Jenn Metz as Gallivan Program students who won the honor of being Collegiate Journalist of the Year in statewide competition, involving both public and private universities and colleges throughout Indiana.

In the past year, Owens was also the recipient of the Harry Ornest Memorial Award in Sports Journalism, which supported his summer internship during 2012 at The Los Angeles Times and provided a scholarship for his senior year at Notre Dame.

Mervosh is currently a reporter at The Dallas Morning News, and Metz is an associate producer at ABC World News with Diane Sawyer.

The Gallivan Program offers a minor in journalism for undergraduates pursuing any major at Notre Dame, and it also conducts activities (such as the Red Smith Lecture Series) to advance the understanding of contemporary journalism for the public at large.