Mónica Rhor is a distinguished visiting journalist with the Gallivan Program in Journalism, Ethics and Democracy at the University of Notre Dame. She is a narrative writer who covers gender, sexuality, spirituality and race for The Houston Chronicle. She has also been a staff writer for the Associated Press, Boston Globe, Miami Herald, Philadelphia Inquirer and Orange County Register. 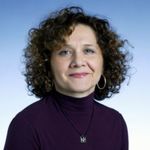 She has written about riots in Miami and hurricanes in Houston, uncovered serious flaws in California's restraining order system and documented stalled investigations of serial killings in South Florida.

Rhor, who was born in Ecuador and raised in New Jersey, has also taught high school journalism and English. Her work has won numerous awards, including honors from the Association for Women in Communications, the Mayborn Literary Nonfiction Conference, Associated Press California-Nevada Newswriting Contest, and the Society of Professional Journalists. In 2008, she was named AP’s Texas Writer of the Year. One of her stories is included in “The Best American Newspaper Narratives of 2012” anthology, which was released in July 2014.

In spring 2018, she worked with students in the inaugural class of Covering America — a digital journalism course on national reporting.