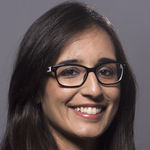 Arelis R. Hernández is a distinguished visiting journalist with the John W. Gallivan Program in Journalism, Ethics, and Democracy at the University of Notre Dame. She is an award-winning reporter for The Washington Post where she has worked since 2014 covering Maryland politics and national breaking news.

She most recently traveled to Puerto Rico to document the aftermath of Hurricane Maria. In her time at The Post, she has reported on such major news stories as the Pulse nightclub shooting in Orlando, the aftermath of Michael Brown's shooting death in Ferguson, Mo., Hurricane Harvey in Houston, and several immigration-related stories. She regularly uses her broadcast journalism skills to amplify her storytelling.

Her work in Puerto Rico with a team of Washington Post journalists won several international and national awards, including an Emmy nomination. She is also a proud graduate of the Philip Merrill College of Journalism at the University of Maryland.

In spring 2019, she worked with the students of Covering America.